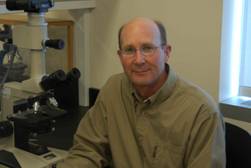 Dennis A. Johnson is professor of plant pathologist at Washington State University (WSU), Pullman, WA. He has been involved in plant disease research for over 30 years. His primary research emphasis is plant epidemiology and developing practical disease management tactics for potatoes. Originally from south eastern Idaho, Dr. Johnson earned a B.S. degree in botany from Brigham Young University and M.S. and Ph.D. degrees in plant pathology from the University of Minnesota. Before joining WSU, he was on the faculty at Texas A & M University where he did research on diseases of small grains. In 1980, he began working at WSU’s Irrigated Agriculture Research and Extension Station in Prosser, WA where he specialized in epidemiology and management of potato diseases. In 1993, he transferred to the main campus in Pullman, WA where he continued his research and extension programs and began teaching a graduate class in plant epidemiology and disease management. He is currently President of the American Phytopathological Society – Pacific Division and edited the book, Potato Health Management – Second Edition, published by the American Phytopathological Society in 2008. He has authored or co-authored numerous peer reviewed research journal articles on diseases of potato and other plants. He has also authored numerous disease control articles for the potato industry and works with the potato industry in the Columbia Basin in managing diseases of potato. 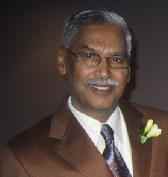 Rudra P. Singh was born September 1, 1940 in the northern Indian province of Uttar Pradesh. He received his B.Sc. Ag. (1959) and M.Sc. Ag. (1961) in India, and his Ph.D. in 1966 from North Dakota State University. Rudra came to Fredericton in 1966 to work on potato spindle tuber disease. In 1968, Rudra accepted a research scientist position with what is now Agriculture and Agri-Food Canada in Fredericton. After 40 years of service Rudra retired in 2008.At the 1964 PAA meeting, Rudra reported on the transmission of PSTVd through tomato pollen and seeds, a first for potato viruses. His subsequent research findings contributed to the discovery of the ‘viroid’ as a new pathogen type. Rudra’s modified “return”-polyacrylamide gel electrophoresis became the standard for PSTVd screening and viroid detection. The use of his detection procedures along with field-surveys for PSTVd in NB and PEI led to the eradication of spindle tuber disease from Canada. This is the first reported eradication of any plant virus disease in the world.In the early1990’s a necrotic strain of Potato Virus Y (PVYN) was detected in eastern Canada. A spike in positive PVYN cases in PEI from one year to the next led Dr. Singh to challenge the accepted testing protocol. Applying his modified testing protocol on questionable field samples, he found significant numbers of false positives, thus saving the industry’s reputation. Rudra received the PVYN Research Award (1991) and PVYN Eradication Leadership Award (1993) for his work.Rudra’s lab determined the complete nucleotide sequences of four strains of PVY and developed an RT-PCR method for the specific detection of each strain. Methods for the simultaneous detection of six viruses and multiple strains of PVY were also developed. Dr. Singh’s protocols were adopted cooperatively by Brazil and US to document PVYN strains in their countries. Dr. Singh is recognized nationally and internationally for his research and training activities in potato viroids and viruses and his involvement in international projects dealing with PSTVd, and PVYN diagnosis and laboratory set-up. His achievements have been recognized through numerous industry, government, and professional society awards. Dr. Singh has served on the editorial board of potato and pathology journals from Canada, US, India and UK. He has co-edited four books and authored over 225 research articles.

Dr. T. Richard Tarn completed a BSc Biology (1963) and a PhD in Botany (1967) at the University of Birmingham in the UK. It was at Birmingham, as a summer student with Professor Jack Hawkes, that Richard first developed an interest in potatoes. Richard emigrated to Canada in 1968 to accept a position as research scientist at what is now the Agriculture and Agri- Food Canada Potato Research Centre, Fredericton, New Brunswick.He retired forty years later in October 2008. His career focused on developing new potato cultivars adapted to north temperate latitudes, with quality for French fry, chip and fresh markets. He contributed to the development of ‘Shepody’ which has been used internationally for French fries and to 10 other cultivars. He initiated an innovative procedure to accelerate the release of selections for industry evaluation. Since 1998, more than 75 selections have been offered, resulting in 12 exclusive agreements. Production and marketing of ‘Rochdale Gold-Dorée’ was licenced to a regional retailer, the first arrangement of its kind in Canada.Richard conducted research to increase genetic diversity via the introduction of Andigena germplasm. This project developed long day adapted Andigena germplasm and a collection of parents with resistance to multiple diseases. Dr. Tarn established the national Potato Gene Resources Repository in 1994. This collection of Canadian and heritage cultivars, and research materials is maintained at the Potato Research Centre. Richard also participated in three USDA Plant Introduction Project collecting expeditions in Mexico where he identified several new Solanum species. He served on the USDA Potato Genebank (NRSP-60) Technical Advisory Committee for 25 years. Richard has been an active PAA member since 1968. He served as Chair of the Breeding and Genetics Section, several terms as Director and was President in 1991-92. In addition to responsibilities associated with the leadership of a multidisciplinary breeding program, Richard traveled extensively to attend scientific meetings and provide consultation to breeding groups around the world.Richard has also been active in his community through leadership roles in the Conservation Council of New Brunswick, performing arts organizations, and the Fredericton Botanic Garden. Richard and Jane Tarn have two daughters and are now enjoying their roles as grandparents of three.