Bill has spent his career as a Research Plant Pathologist with the Agriculture Research Service of the United States Department of Agriculture (USDA/ARS). He spent two years at Lubbock, Texas and five years at Tiffon, Georgia before moving to Ithaca, New York in 1969. He has held a courtesy appointment in the Department of Plant Pathology, Cornell University, Ithaca, New York during this period (Associate Professor 1989-1978; Professor 1978-present). From 1987-1997, he served as Supervisory Plant Pathologist and Research Leader for USDA/ARS at Ithaca, NY, and is currently the Location Director as well as continuing as Supervisory Plant Pathologist and Research Leader. His primary research interests are host-plant resistance to nematodes, biological control utilizing fungal and bacterial pathogens of nematodes, integrated management system for nematode control. He currently holds membership in the Society of Nematologists, American Phytopathological Society, Potato Association of America, and Organization of Nematologists of Tropical America.

Bill has studied both the golden nematode (Globodera rostochiensis) and the root lesion nematode (Pratylenchus spp.), and their impact on potato production during his tenure at Cornell and Ithaca, New York. The focus of his studies has been the identification and utilization of hostplant resistance for nematode control. This approach has been particularly important for the control of G. rostochiensis, which is localized to specific areas of New York State within the United States of America. Race 1 of golden nematode (Rol) has been known in New York State for over 50 years with chemical control procedures being the primary control approach until 1984. Since then resistant varieties have been required in place of soil fumigants based on results of Bill’s research. He has worked closely with Professor R. L. Plaisted (Plant Breeding, Cornell University) for many years to screen all selections in the breeding program for Rol resistance with the result that only Rol-resistant clones reach the advanced selection and variety name stage of development. This program has been marked by a strong collaborative effort among USDA/ARS, USDA/Agricultural Plant Health Inspection Service (APHIS), New York State Department of Agriculture and Markets, and Cornell University. Bill has also provided a service to screen advanced selections for Rol resistance to all other breeding programs in North America, which has enabled varietal releases in recent years to be characterized for Rol resistance. He has used these resistant varieties to develop an effective management plan for nematode control based on the use of resistant and non-host crops in rotation with susceptible varieties with the process being monitored by USDA/APHIS nematode surveys. Within the last five years, a new race (Ro2) of the golden namatode has been identified; but, due to the foresight of Brodie and Plalsted and combined with 10 years of prior evaluations, germplasm with excellent Ro2 resistance has also been identified. Bill’s work has been characterized by its high priority on a problem of national interest to the potato industry and by collegial interactions with other scientists.

Bill Brodie has received the Empire State Potato Club Certificate of Merit (1987), USDA Certificate of Merit (1984), USDA/ARS Outstanding Scientist of thee Year (1989), USDA Superior Service Award (1991), and a USDA Group Honor Award for Excellence (1995). All of these awards attest to the importance of his research to agriculture generally and the North American potato industry specifically.

Bill Brodie is a long-standing member of PAA. He has freely shared his expertise and knowledge of the golden nematode with PAA members and PAA Sections, especially the Pathology, Certification and Breeding and Genetics sections. He has also freely shared his knowledge with scientists and governmental units in other countries; especially Canada. He has also participated in regional and national agricultural meetings concerning potatoes on a regular basis. Although these latter meetings are outside the auspices of PAA, membership is usually mostly PAA members and PAA and the potato community benefit. 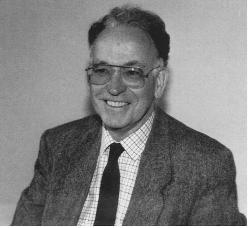 On March 31, 1998 Kenneth Proudfoot retired front his position as Research Scientist at Agriculture and Agri-Food Canada’s Atlantic Cool Climate Crop Research Centre in St. John’s, Newfoundland. His cheerful manner, enthusiasm for his work and team spirit will be missed by all Center staff.

Mr. Proudfoot completed a post-graduate degree in Agriculture at Queen’s University, Belfast, Ireland. In 1956, he began work as a potato breeder. This became his vocation for over forty years.

In 1961, Mr. Proudfoot was awarded a Senior Research Fellowship from the W.K. Kellogg Foundation to work in the United States and Canada, and a Rockefeller Foundation grant to conduct potato research in Mexico. In 1967, along with is wife Helene and their young children, Kenneth moved to St. John’s to begin work as a Research Scientist with Agriculture Canada. He was responsible for the potato and rutabaga breeding programs in St. John’s from 1967 until his retirement this year. In recognition of Mr. Proudfoot’s contribution to Newfoundland agriculture, he was inducted into the Atlantic Agriculture Hall of Fame in 1995. He was presented with an Agcellence award in 1998 from Agriculture and Agri-Food Canada, honoring his career achievements.

Mr. Proudfoot served on scores of provincial, national and international committees, both as a professional and as an active member of his community. He often lectured at Memorial University and was a guest on numerous gardening radio shows. Despite his hectic schedule, Kenneth was always available to encourage and guide younger scientists.

Kenneth Proudfoot was devoted to his work as a plant breeder. He enjoyed the challenge of improving the genetics of crop species. Applying that knowledge to the improvement of crop potential is both a science and an art – for improvement is an intangible concept. A plant breeder must understand the operational problems farmers encounter. Mr. Proudfoot worked in close association with the Newfoundland farming and gardening community, often distributing seed upon request, just to find out how a developing line performed in real farming situations. This is not a conventional approach to breeding but it was a successful formula for plant breeding in Newfoundland.

During his career, Kenneth bred, developed and registered nine varieties of wart resistant potatoes. Some of those varieties were also resistant to the golden nematode, a pest prevalent in Newfoundland. Seven of those varieties now account for 75% of the province’s seed potato industry. He was fondly referred to in the industry as the “one man breeding program”.

His contribution to the local agriculture industry is evident in the number of improved potato and rutabaga varieties he developed (see adjacent listing of some of the most recent varieties).

The staff recognizes and appreciates Kenneth’s years of devotion and wish him well in his retirement.

Lind has spent his career with the United States Department of Agriculture (USDA) Agricultural Research Service as a Research Geneticist. He worked five years in the potato breeding program at Aberdeen, Idaho before moving to the potato breeding program at Beltsville, Maryland in 1965. His primary research interests involve breeding for insect resistance, particularly to Colorado potato beetle and potato leafhopper. He has been an extremely active and dedicated member of the Potato Association of America.

Lind has studied the role of glycoalkaloids as a resistance mechanism to Colorado potato beetles and potato leafhoppers. In particular, he identified leptine as a Colorado potato beetle feeding deterrent. Leptine is a glycoalkaloid which is synthesized in the leaves, but not the tubers, in a few clones of Solanum chaeoense, a diploid potato species. Since glycoalkaloids impart a bitter taste to potato tubers, the amount of glycoalkaloids in tubers should be kept below 20 mg / 100 g fresh weight. The discovery of a glycoalkaloid synthesized only In the leaves opened up a new research area in plant resistance studies. In addition, he determined that leptine synthesis was under the control of many genes. By doubling the chromosome number of a leptine producing S. chacoense clone, he was able to overcome crossing barriers between S. chacoense and Solanttm tuberosum and thereby introgress genes for leptine synthesis into S. tuberosum. He has produced and evaluated several hundred S. tuberosum-S. chacoense hybrids and demonstrated that leptine was present in these hybrids, which resulted in high levels of resistance to foliage damage caused by adult and larval Colorado potato beetle feeding. He has distributed his high leptine clones to numerous potato breeders in the United States for further enhancement efforts.

Lind demonstrated that two different glycoalkaloids were important in potato leafhopper resistance. Tomatine and chaconine caused significant mortality in potato leafhoppers. Tomatine is found in several wild potato species, whereas, chaconine is the major glycoalkaloid already present in commercial potato foliage. He produced interspecific hybrids between S. berthaultii and S. tuberosum to introgress genes for the formation of”B” type glandular trichomes on leaves from S. berthaultii into S. tuberosum. Some of the F1 hybrids exhibited moderate densities of type “B” trichomes and these hybrids exhibited resistance to infestation by potato leafhoppers.