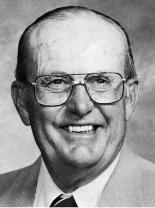 If the essence of science is the gleaning of large truths from small facts, Jim Davis is a quintessential scientist. Perhaps it was growing up as the son of a jeweler that accounts for his eye for fine detail and his knack for recognizing the gem that is truth. Whatever the reason, Jim Davis has, for 25 years, bestowed on the potato industry the benefits of a scientific mind focused in relentless pursuit of understanding disease control.

Jim was born in Nebraska in 1929. His family eventually moved to California where he earned a B.A. degree in microbiology and chemistry at UC Riverside (1956) and went on to take his M.S. and Ph.D. in plant pathology (1967) while working as a technician at UC Davis. Along the way, he somehow found time to woo and marry Ann LaGrone (now deceased) and raise three children.

Although his doctoral thesis concerned a canker condition of peach, his background in microbiology, mycology, physiology and virology, coupled with an aversion to ladders, led Jim to venture down from the trees in search of more earthy pathogens. Jim accepted an appointment as an assistant professor at University of Idaho’s Aberdeen Research and Extension Center in 1968, and immediately found a crop with problems to his liking. There began a lifelong attack on soil-borne diseases of the potato. The results of this effort have been considerable.

The techniques Jim has developed for detecting and quantifying the presence of various pathogens are the foundation that now make possible a host of routine investigations which were formerly impractical or impossible. Jim is widely regarded as the planet’s most respected authority on Verticillium dahliae and its contribution to potato early dying. His many publications on this and other pathogens are often cited. Recently, as if to emphasize his conviction that the easy answer is not always the correct one, Jim employed his eagle eye to identify another organism that participates in early dying and mimics “Vert” symptoms, and the name Colletotrichum coccodes now rolls from the tongues of plant pathologists.

Jim takes an integrated approach to problems of disease control and is ever sensitive to the interplay of irrigation, fertility management, crop rotation and pathogen population. The control strategies he proposes for Verticillium, scab and Rhizoctonia have proven practical and cost-effective to the point that Jim regularly receives a tribute that many of us wish for: when he talks, growers and fieldmen listen!

Jim’s expertise has caused him to travel widely. If truth be told, not all of Jim’s reputation has been built on his laurels as a scientist. Jim is known in Australia as the Yank who survived an attack by a vicious Emu, and in Leningrad as the American who went hand to hand with the Russian Mafia to retain possession of the Levis he was wearing. Persistent rumors involving the Countess of Strathmore followed Jim home from the International Blackleg Conference in Scotland, and back home in Aberdeen, Jim is associated with a history of plumbing failures best left to his own description.

Among our group, Jim’s tact and diplomatic style are legendary. A remarkable willingness to pose the potentially embarrassing but absolutely crucial question is Jim’s trademark. Those of us who love Jim recognize in this trait the forthright honesty of a dogged dedication to the truth, without which our science would go astray. Perhaps it is for this quality above all that I am privileged to present Dr. Jim Davis as an Honorary Life Member of The Potato Association of America.

Bob spent his entire professional career as a plant pathologist for the USDA-ARS at the Beltsville Agricultural Research Center. He worked the first six years in bean and pea investigations, where he described a new race of bean anthracnose, developed a rapid method to isolate phytopathogenic bacteria from infected plant tissue, described a new bean virus, and discovered a new seed-borne bacterium that affects watermelon.

Bob has served as Director, Secretary Treasurer, Vice-President and President of the pathology section of The PAA and Secretary-Treasurer, Vice-President and President of the Potomac Division of the American Phytopathology Society. In addition, he has administered over $2 million in grants to university researchers on bacterial ring rot and scab through the National Potato Council/USDA grants program, and organized and co-chaired the first national workshop on bacterial ring rot of potato.

Bob and Joyce, his wife of 39 years, have three children and four grandsons. Because of his dedication to potato pathology and cooperation with the potato breeding-germplasm enhancement program at Beltsville, it is an honor and a privilege to present Robert Goth for Honorary Life Membership in The Potato Association of America.

Paul H. Orr was born January 19, 1935 near Jamestown, North Dakota. He grew up and worked on the family grain and livestock farm and graduated from Jamestown High School in 1953. Paul served two years in the U.S. Army, including a tour in Germany. In 1957 he entered North Dakota State University and graduated in 1961 with a B.S. in Agricultural Engineering.

After two years with the Bureau of Land Management in Miles City and Dillon, Montana, Paul joined the U.S. Department of Agriculture in 1963. He was stationed at the Potato Research Laboratory in East Grand Forks, Minnesota where he conducted research on potato storage and handling problems. During 1964-1971, Paul returned to North Dakota State University in Fargo to obtain advanced coursework in Industrial Engineering and Mathematics while maintaining his research program with the U.S. Department of Agriculture in East Grand Forks. In 1976, Paul was appointed Laboratory Director and Research Leader of the Potato Research Laboratory. He continues to serve in these leadership roles, coordfnating the efforts of the four cooperative units which comprise the Potato Research Laboratory; the U.S. Department of Agriculture-Agricultural Research Service, the Minnesota Agricultural Experiment Station, the North Dakota Agricultural Experiment Station and the Red River Valley Potato Growers Association.

Paul’s research has focused on problems associated with raw product handling in relation to potato storability and processing quality. His expertise is widely recognized. He has served as a technical advisor on various aspects of potato storage and quality for the Agricultural Research Service and he has served on numerous technical advisory committees for the potato industry and for potato variety development programs. Paul’s responsibilities in guiding pilot scale evaluation of breeding selections for processing quality has been a mainstay in the release of many recently named varieties.

Paul has been a member of The Potato Association of America throughout the years and was one of the founders of the Utilization Section of PAA. He served as chair and in other offices of the section. In 1989, Paul was selected by the executive committee to represent The Potato Association of America regarding aspects of potato storage and utilization at the international workshop on “Recent and Future Developments of the Potato in the World” held in the Netherlands. For many years, Paul played a lead role in maintaining a Regional Potato Project which facilitated interaction and coordination of federal and state potato projects in the north central states. As a founder of a local section of The American Society of Agricultural Engineers, Paul initiated an effective sectional focus on technology in industrial agriculture which included an emphasis on serving the potato industry.

Paul has received numerous awards from the USDA-ARS recognizing his work and recognizing his fair and effective management of human resources. Paul and his wife, Dorie, have seven children and six grandchildren. Paul enjoys hunting, jogging and camping with his family.

Dennis Zeloski was born in Antigo, Wisconsin, January 4, 1940. After graduating from Antigo High School in 1958, he attended the University of Wisconsin-Madison, graduating with a B.S. degree in 1963. He immediately joined his father, Felix Zeloski, in his extensive farming operations, later becoming owner/operator.

Potatoes have been his abiding interest. All of his basic foundation seed operations are located in Eagle River on about 1,200 acres consisting of tuber unit, clonal selections and limited generation plantings.

Dennis has also been most generous with his time and effort with at least five environmental organizations in the state and community, as well as welfare, church and social groups. He has been awarded several citations for his efforts, including “Seed Potato Grower Of The Year” in 1988 by the National Potato Council.

Dennis married Bettillee Bowe in 1964, a year following their graduation from the University of Wisconsin-Madison. They have four daughters: Kim, Debra, Aime and Jaine. He owns and flies his own plane, and does find time for hunting wild turkey, pheasant, deer and, occasionally, fishing. Recently, the family funded and dedicated to Felix a research screenhouse on the Lelah Starks Foundation Seed Potato Farm.

Dennis is a conscientious person, dedicated to his work, his family, and his associates. It is my distinct pleasure to present Dennis Zeloski as Honorary Life Member of The Potato Association of America.