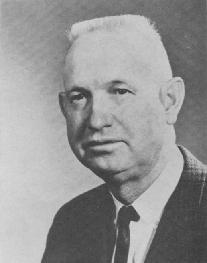 “Jim, “as he is known to all of his friends and associates, was born November 19, 1909 in Rock Ford, Colorado. He received his Bachelors Degree at Colorado State University in Horticulture and did his graduate work at University of Wisconsin and at Cornell University where he received his Ph.D.

He began his long tenure of service to the University and State of Idaho in 1941 when he became the first full time potato research man in Idaho. He remained in the position of Associate Horticulturist in charge of potato research at Aberdeen Branch Experiment Station from 1941 to 1944.

After a short absence when he worked with California Packing Corp., he returned to Idaho in 1945 and was named Associate Professor and Associate Horticulturist at Moscow. He became Head of the Department of Horticulture in 1948. In 1949 he became Associate Director of Experiment Stations. In 1955 he became Dean of the College of Agriculture, retiring July 1, 1972. His research included the genetic and physiological aspect of potatoes, seed treatment, size of seed piece, spacing of plants, irrigation problems, seed handling and seed piece decay, cultural treatment and storage, fusarium wilt, breeding and selection for resistance, and potato seed; stock improvement. He investigated other problems such as use of hormones on potato seed pieces and vine killers to hasten maturity and the effect of type of storage on value of potatoes for seed. Some of the work Dr. Kraus started at the Aberdeen Branch Station is still being used as a pattern for studies on potatoes.

Partially through his efforts and support, the Idaho Potato Industry has flourished and grown to become the largest potato producing state in the U. S. He wrote or co-authored some 35 bulletins and publications in Scientific Journals.

I am sincerely honored and pleased to have the distinct honor and privilege to present Dr. James E. Kraus as an Honorary Life Member of The Potato Association of America. 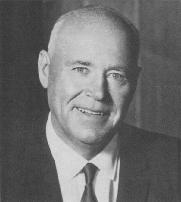 It is a pleasure for me to introduce J. R. Simplot, who was born in Dubuque, Iowa, and at an early age moved with his parents to Idaho, where he still resides. He spent his youth on a farm in southern Idaho and, while still in his teens, began growing, packing and shipping potatoes. From this small beginning, a major industrial complex has since grown. He now owns and operates a family of corporations engaged in the processing of potatoes, both frozen and dehydrated; the operation of several thousand acres of agricultural land in Idaho, including one of the largest sheep and beef operations in the West; and in the operation of a major chemical processing plant which is one of the largest fertilizer producers west of the Mississippi River.

To support his fertilizer manufacturing activities, he owns and operates several large phosphate producing mines in southeastern Idaho, which has established him as being perhaps the largest producer of phosphate in the West.

In addition to being the founder and president of the J. R. Simplot Company and its many subsidiaries and affiliates, Mr. Simplot presently serves on the Board of Directors of Idaho Power Company, First Security Corporation, Continental Life & Accident Company, Morrison-Knudsen Company, Inc., and McDonald’s Corporation. He has served as a member of the Board of Trustees of the College of Idaho since 1944, for nine of those years as Chairman of the Board; and he is currently a member of the Advisory Council to the Idaho Department of Commerce and Development. Among the many honors and recognition Mr. Simplot has received are the following:

Named one of Ten Outstanding Young Men in the nation in 1939 and 1943 by Junior Chamber of Commerce (one of only four men ever to receive this award twice); Named to the Agricultural Hall of Fame in 1961; Received Honorary Doctorate (LL.D.) from College of Idaho in 1961; Named Distinguished Citizen of Idaho by State Chamber of Commerce in 1964; Received the American Academy of Achievement’s Golden Plate; Award as Captain of Industry in 1967; Received Hal Williams Hardinge Award for Outstanding Achievement; in the Field of Industrial Minerals in 1970; Jack Simplot is an enthusiastic Idahoan and booster of the free; enterprise system.

His interest in all phases of community and civic progress is well known wherever he has operations or employee representation. He is an outdoor enthusiast in his recreational pursuits; he loves to ski the mountains in winter and the blue waters of Payette Lake in the summer. He is an avid horseman, big game hunter, bird hunter and fisherman; and he undertakes his recreational activities with the same zeal that has made him one of America’s outstanding business successes. In addition to these brief comments about Jack I would like to quote from some who have known him over the years.

I think it is also a great tribute that it was Jack’s colleagues in the industry who pushed for this honor for him tonight. Mr. President, it is a distinct honor to present Mr. Jack Simplot for Honorary Life Membership in The Potato Association of America.