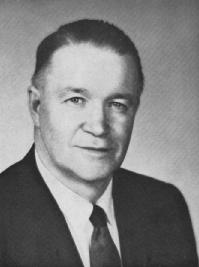 Arden Burbidge was born September 9, 1918 on a farm his grandfather homesteaded near Park River, North Dakota. After graduating from the Walsh County Agricultural School in 1935 he attended North Dakota State University from 1935 to 1938. He was a state and national officer of Future Farmers of America and a member of Alpha Zeta and Kappa Sigma Chi. He married Doris A. Larson of Fargo November 24, 1945. Doris and Arden have one daughter, Rebecca.

Mr. Burbidge, as an innovating farmer, has always been on the alert to seek, test and adopt modern agricultural practices on the 4000-acre Burbidge Farms and Burbidge Seed Company which he founded on the west edge of the Red River Valley. He has cooperated extensively with the State University and the United States Department of Agriculture conducting experimental work on his farm. He has kept abreast of current potato research by attending many of the Potato Association of America Meetings.

One may wonder how a man can manage an extensive potato seed business and still have time for so many other activities. It is only because Arden has a tremendous amount of ability, drive and tenacity. His great capacity for work and his analytical mind leave little doubt as to why he was recently selected to receive the third annual John Lee Coulter Achievement Award in North Dakota Agribusiness. The latest information we have on Arden was his election to the Board of Directors of the Pioneer Mutual Life Insurance Company.

It is a pleasure for me to present Mr. Arden Burbidge for Honorary Life Membership in The Potato Association of America. 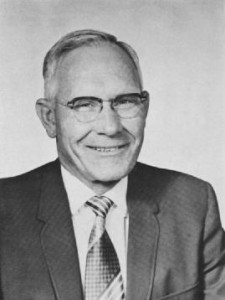 President Johansen, ladies and gentlemen: It is with pleasure that I present to you Dr. Robert Kunkel for Honorary Life Membership in The Potato Association of America.

Robert has been Professor and Horticulturist at Washington State University since 1957. Dr. Kunkel was born to immigrant parents on December 7, 1912 on a small fruit farm just outside Salt Lake City, Utah. During his youth he was employed on a fruit and vegetable farm and typical of Bob, he gives much credit to several of those for whom he worked for their encouragement to him to complete high school and to continue in college. Entrance to college was made possible by an athletic scholarship and it is not widely known among his colleagues that he was an outstanding wrestler. He obtained the B.S. degree from Utah State University and his doctorate from Cornell University.

From 1945 until 1956 he was a member of the faculty of Colorado State University where he conducted research on cultural practices and their effect on yield and processing quality of potatoes. In cooperation with others he developed a mechanical method of separating potatoes by specific gravity. Studies with the Russet Burbank led to its acceptance as an important variety in the San Luis Valley. He was acting professor at Cornell University in 1956 cooperating with Dr. Ora Smith on effects of fertilizer on yield, specific gravity and chip color. The next year he accepted the position of Professor of Horticulture and Horticulturist at Washington State University to initiate research on blackspot at which time the Washington potato industry was decreasing primarily due to this defect. Washington ranked sixth in potato production at that time, now ranks third in production and first in yields per acre.

As a result of his research in several states, Bob has published more than 100 scientific and popular articles on potatoes and can claim much of the credit for the marked increase in the importance of the potato industry in Washington. He is a member of Alpha Zeta, Sigma Xi, American Institute of Biological Sciences, Western sections of American Society for Horticultural Science and Soil Science, and is a fellow of the American Association for the Advancement of Science. Dr. Kunkel has been a member of the Potato Association of America for 25 years, having served as a member of several committees, chairman of a few, director for three years, on the editorial board for five years and is our newly elected Vice President.

Bob has been active in church work and scouting most of his life. During 1938-39 he served as a missionary to Germany for his church, leaving that country the night German troops invaded Poland. Much of the credit for the commendable things which I have said about Bob must go to Norma, his wife during the past 30 years. Mrs. Kunkel’s primary interest has been her family of three boys and two girls, but has found time to advise several youth groups, work part-time as a research assistant for the Home Economics Research Station at Washington State University and is currently president of the Pullman, Washington Home Economics Association.

The sons evidently are following in Bob’s footsteps as they are all Eagle Scouts. Their youngest daughter, Charlotte, must acquire her expertise from her mother, as she recently thrilled the family and friends by being elected governor of Girl’s State in Washington. Mr. President, I am pleased to present Dr. Robert Kunkel for Honorary Life Membership in the Potato Association of America.

Robert was born Dec. 7, 1912, in Holladay, Utah, son of Frank and Margareta (Pardonner) Kunkel. He received his bachelor’s degree from Utah State University and his Ph.D. from Cornell University in horticulture. Robert married Norma Mackay on June 28, 1941.

He was a professor of horticulture at Washington State University for 21 years. He served as president of the Potato Association of America and was awarded the Distinguished Alumni Award from Utah State in 2000. Robert was a member of Phi Kappa Phi, Sigma Xi and Alpha Zeta.

Following his retirement from WSU he traveled to numerous countries around the world in Farmer to Farmer assistance programs. Robert served as an active member of the LDS church throughout his life.

He was preceded in death by his wife, Norma Mackay Kunkel.

The visitation for family and friends will be held from 5 to 7 p.m. Friday, Nov. 2, at the Kimball Funeral Home in Pullman. The funeral service will be held at 11 a.m. Saturday, Nov. 3, at the Pullman Church of Jesus Christ of Latter-Day Saints, 1055 NE Orchard St. Vault interment will follow at the Pullman Cemetery.

Memorial donations are suggested to the Boy Scouts of America or to the LDS Humanitarian Fund.

Kimball Funeral Home of Pullman is caring for the family. Online condolences may be sent to www.kimballfuneralhome.com 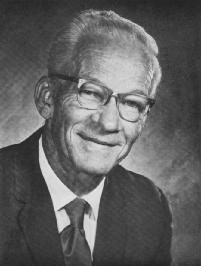 President Johansen, ladies and gentlemen: it is my pleasure to present to you Professor Wilford R. Mills for the award of Honorary Life member in the Potato Association of America.

This year is Bill’s thirtieth year at Pennsylvania State University. During these three decades Bill has contributed to the potato industry and to the broader advancement of science by combining his training as a plant pathologist and a plant breeder. Bill was raised on a farm in Fillmore, New York and went to Cornell for his B.S. and stayed on to work with Dr. Reddick for his Ph.D. in 1939. This was his introduction to the wonders of Phytophthora infestans which has remained one of his primary interests. His early research helped identify the gene for gene relationship that exists between the so-called major genes from Solanum demissum and the pathogen. His breeding program at Penn State had as its objective the inclusion of these genes in potato varieties in combinations that would give a measure of protection to late blight. As the complexity of the genetics of the fungus became recognized through further research by Bill and others in the U.S. and in Mexico, where Bill served as a Special Scientific Aide in 1952, he shifted his emphasis to selection for field resistance. In recent years the major emphasis of his potato breeding program has been the production of a variety with good chipping quality and resistance to verticillium wilt as well as late blight.

Bill has contributed his talents to the field of international agriculture. In addition to his service with the Rockefeller Foundation in 1952, he served as geneticist and head of department of genetics at Recife Institute for Agricultural Research in Brazil from 1935-37, and as a plant industry specialist at the Inter-American Institute of Agricultural Science in Costa Rica in 1958. It is pertinent to note that while he was in Brazil he met and married the daughter of a Baptist Missionary. Virginia is here tonight to share this moment of recognition.

Bill, we congratulate you for the contributions you have made and for the example you have set in your generous sharing of ideas and materials. Mr. President, I am pleased to present Dr. W. R. Mills for Honorary Life Membership in the Potato Association of America. 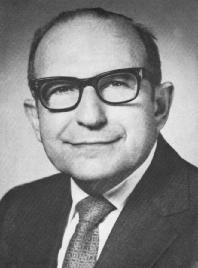 It is a pleasure for me to introduce Dr. Robert H. Treadway, educated at Indiana University, Ph.D. 1936, and elected to Phi Beta Kappa, Phi Lambda Upsilon and Sigma Xi.

He was employed by DuPont at Cleveland, Ohio, 1936-40 and by A. E. Staley Manufacturing Company at Decater, Illinois, in 1941. Since 1941 he has been at the Eastern Regional Research Laboratory, Agricultural Research Service, USDA, Philadelphia, Pa., in a series of increasingly responsible positions. Initially he conducted technological research and development work on carbohydrates, especially potato starch, synthesizing new derivatives and developed new and improved adhesives and sizes. Worked to promote the utilization of cull and surplus potatoes and their storage and preservation. As Head, Potato Investigations he organized, planned and conducted a program of research on the utilization of the white potato, investigated the relationship between the chemical and physical properties of potatoes and their use in food and non-food industries. He has published 59 research papers and reviews and holds seven patents, all on various aspects of potato chemistry and utilization.

Bob has attended all of the Potato Utilization Conferences and has been responsible for the programs for a large number. He has served as technical advisor for many commissions and study groups on potato utilization and as a subject matter specialist on several research contracts. During this period he was truly the resident potato expert, with an international reputation.

About 1963 he accepted wider responsibility in the area of Industrial Development and worked with the entire commodity program of the Eastern Regional Research Laboratory rather than potatoes alone. He now attends symposia, seminars, arranges conferences, answers technical inquiries and serves as liaison between industrial concerns and laboratory scientists and engineers in the various commodity areas.

He presently is Assistant Director, Industrial Development; a member and a former director of the Potato Association of America; a member of the Institute of Food Technologists, the American Chemical Society and Alpha Chi Sigma. Bob has a tremendous capacity for work and is a perfect example of the adage “If you want something done, ask a busy man.”