It is an honor and a pleasure to present Louis C. Young for Honorary Life Membership in The Potato Association of America. Louis Church Young was born in Keswick, New Brunswick, Canada December 30, 1901, He graduated from High School in Stanley. In 1918 he received a teachers license from the N.B. Teachers College. In 1922 he graduated from Mount Allison University with a B.A. and in 1927 graduated from the Ontario Agricultural College with a B.S.A. In 1939 he received his M.S. from the University of Minnesota. His thesis was entitled “The Value of Cultivated and Wild Species of Solanum in a Potato Breeding Program,” and the work was conducted under Dr. Fred Krantz.

In 1928 he married Mary Alcoe. They have two children, Margaret (Mrs. D. V. Waldon), presently living in Dalhousie, N.B., and Donald, with the Canada Department of Agriculture in Fredericton. In 1927 he accepted employment with the Canada Department of Agriculture in Fredericton as a Horticulturist. From 1929 to 1959 he served as Senior Officer in Horticulture: During this period, the Horticulture program developed from a one-man to a five-man program with major emphasis on potatoes, strawberries, blueberries and apples. All of Lou’s research was not restricted to potatoes. His early work showed that corky core of apples could be controlled by the application of boron. He was the first to demonstrate that brown heart of swedes could be controlled by spraying boron on the foliage under conditions in which soil application had proven ineffective. His cultural studies on the growth and development of apples on the extremely shallow soils of the St. John River Valley were basic to the establishment of the present industry in that valley.

Lou has been associated with potato breeding since 1934 and since 1959 has devoted his full energy to this work. Since 1959 he has served as Head, Potato Breeding Section at Fredericton, New Brunswick. This Section is made up of 11 Research Officers representing many disciplines, working together with the overall objective of potato improvement through breeding. The development of the team approach and the broad area covered within the section are a tribute to Mr. Young’s foresight. Early in his work with potatoes he developed methods for growing potatoes in the greenhouse for pollination purposes and his findings regarding the flowering response of the potato to artificial light are well known and used internationally. He has developed an improved system for conducting field trials to evaluate potatoes for field resistance to late blight. This system enables differentiation between resistance due to genetic factors and resistance associated with maturity, fertilizer practices and other physiological factors. He has been closely associated with the development and introduction of the following potato varieties: Keswick (1951), Huron (1957), Avon (1958), Fundy (1958), Hunter (1961), Sable (1964) and Grand Falls (1965).

Mr. Young has published many research papers (eight of which appear in the American Potato Journal) and has prepared numerous bulletins for general distribution. He has served on the Editorial, Policy, Breeding and Genetics, and International Relations Committees of the Potato Association of America. He served as general chairman of the Association’s Annual Meeting in 1959 and served as Vice-President and President-Elect previous to becoming President of the Potato Association in 1963. 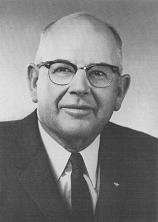 Lyman Wright was practically born in the potato business. He was born in the house where he now lives near Monte Vista in the San Luis Valley.

In 1927 at the age of 19 he married Edith Wilson. They were both young, but having a keen sense of values Lyman wasn’t about to let her get away. During the 39 years since, Edith has been a devoted wife, a helpmate, business associate and wonderful mother to the two boys who are with him today in the farming and marketing partnership. The next year (1928) they were both in Denver attending business school while Lyman made up his mind, whether to go to “Colorado Aggies” or go directly into farming, when they received word that his father had been seriously injured in a team run-away accident with a grain binder. His father died the following day. Abruptly fate had made the decisions for Lyman. There was no more thought of Aggies, or business college either. There was an estate to settle and three quarters of land and 100 horses to care for. His father had been a horse breeder as well as a farmer.

At this rather young age, after spending 4 years in high school and one year at business school, Lyman was not an experienced farmer. But he buckled in with all the tenacity the job required. Fortunately, he had a very wonderful neighbor, Lester Hawkins (or “Leck”), who helped him over many of the rough spots.

It was my good fortune to become acquainted with “Leck” about twenty years ago, two or three years before his death. In reminiscing one day he told me that one of his life’s most rewarding experiences had been the opportunity to help a young man of Lyman’s determination and ambition. This story has a sequel. Some years later, when Lyman had become an accomplished farmer in his own right, Mr. Hawkins had a serious accident. He was hospitalized for weeks and was incapacitated for months. Innnediately Lyman took over. It never occurred to him to do anything else. He managed the Hawkins farm as well as his own until”Leck” was able to be around again. This kind of consideration and brotherly love is not often seen. What impressed me most about this story was that it came from several different sources and everyone had a warmhearted glow from it.

The three quarters of land have now grown to seven. With his two sons, comprising Lyman Wright & Sons, they grow 640 acres of foundation and Certified seed potatoes, shipping the baker size to market and selling the smaller size for seed. They operate their own sales agency, packaging and marketing between three and four hundred carloads of commercial potatoes each year.

Lyman has served on nearly every committee in Colorado which would in any way benefit farmers and the potato industry. He has been a certified potato grower for more than thirty years and has served as a member of the board of directors of the Colorado Certified Potato Growers for the past decade and is presently its secretary. He received the coveted award of Colorado Master Seedsman in 1958.

Lyman is presently chairman of the Governor’s advisory committee on farm labor, a member of the agricultural advisory committee to the State Board of Agriculture and is on the executive committee of that group. He is also co-chairman of the Colorado Experiment Station Committee. Several Governors have used his knowledge of the State’s water resources, and he probably knows as nmch as anyone about the water development and uses in the San Luis Valley.

Mr. President, Ladies and Gentlemen, it is indeed a pleasure for me to present Mr. Lyman Wright for Honorary Life Membership in The Potato Association of America.

At the recent meeting of The Potato Association of America, at Fort Collins, Colorado, Lawrence A. Schaal was given Honorary Life Membership in the Association.

Larry was born October 19, 1900, in Manhattan, Kansas, and was farm-reared. After graduation from high school in his home town, he chose as his life’s work a career in plant science. His education encompassed a B.S. degree from Kansas State University in 1924 in Agricultural Economics and Plant Pathology, and an M.S. degree (1926) and a Ph.D. degree (1941) in Plant Pathology and Entomology — both from the University of Minnesota.

At the start of a career of 40 or more years of service in the U. S. Department of Agriculture, Dr. Schaal was Field Assistant in Cereals Investigations, engaged in barberry surveys in several mid-western states. In 1930 he took charge of Potato Disease Investigations at the U.S.D.A. Potato Station, Greeley, Colorado. Here he conducted field studies on potato varieties and diseases under irrigated conditions. Among his main contributions during the ensuing years were his investigations on physiological aspects, insect relationships, and inheritance of resistance to the scab organism together with allied chemical studies with the same organism. One of these studies correlated scab resistance with chlorogenic-acid content in tubers. He established further evidence of the existence of physiologic races of scab. In his scab-resistance work Dr. Schaal, with G. Johnson, investigated the inhibitory effect of phenolic compounds in the developmerit of resistance to scab. In aspects of potato production, in cooperation with breeders, Dr. Schaal participated in the introduction of the Yampa, Blanca, Pawnee, Osage and Navajo potato varieties that possess scab resistance. He was co-author of a Farmers’ Bulletin on Potato Production in the Western States and has published a total of fifty four papers.

In the latter years of his career Larry was superintendent of operations at the U. S. Horticultural Field Station at Cheyenne, Wyoming. He supervised the operations of the staff at that station in their research on vegetables, fruits, ornamentals, and windbreaks.

In October 1964, Dr. Schaal retired after forty years of Federal service and is now living in Durango, Colorado, enjoying his retirement as a landscape consultant. 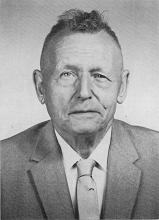 The Potato Association of America, at its Annual Meeting in Fort Collins Colorado, was pleased to present to Theodore P. Dykstra Honorary Life Membership in the Association to mark a long and purposeful career in pathology and, in particular, his potato virus disease work. Theodore P. Dykstra was born in Oldeboorn, Holland, December 23, 1896. He came to the United States as a young man and after graduation from high school in Portland, Oregon, attended Oregon State College from which institution he received his B.S. degree in Plant Pathology in 1923. In 1938 he received his Ph.D. degree from the same institution after obtaining at an earlier date (1925) an M.S. degree from the University of Wisconsin.

From 1926 to 1936 Dykstra devoted his energies to virus investigations. His valuable contributions included work on insect vectors and vector relationships, sylnptomatology, and on the prevalence of major potato virus diseases. He was one of the earliest workers to recognize the existence of potato virus strains and the potential danger of weeds as carriers of potato viruses. He also determined the identity of several different potato virus diseases in Europe and in these early days of virus work was able to coordinate European descriptions with the American counterparts of the same disease. This work greatly reduced confusion in identifying viruses as described in both European and American literature. Aside from his virus studies, Dr. Dykstra has also worked on control of bacterial ring rot of potato, a screening method for evaluating firstyear potato seedlings for sccab resistance, and produced the potato variety, Catoosa, the first red-skinned potato with both late blight and scab resistance.

Some of Dr. Dykstra’s contributions were made in foreign agriculture. During World War II he went to China for two vears on an assignment with the State Department. In China he made extensive observations on potato production problems as well as diseases. After his return from China the Foreign Economic Administration requested his services for similar duty in Holland where he helped military and civilian authorities in the planning of an emergency program for agricultural production and the rehabilitation of the agricultural economy of the Netherlands after the war.

During his 40-year career in the U.S. Department of Agriculture Dr. Dykstra has been author or co-author of numerous publications on virus problems, potato production, and production of disease-free seed, and of several Farmers’ Bulletins or circulars on potato diseases and their Control as well as potato growing in the South.