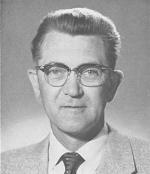 Dr. Henry M. Darling is a native of Wisconsin having been born in Spring Valley on December 1, 1908. He took his Bachelor of Philosophy degree at Ripon College in 1931 and the Master of Science degree from the University of Minnesota in 1935 after taking about a year and a half from his studies to work in the Federal Land Bank. He then accepted a position as Assistant Professor of Plant Pathology with Auburn University in Alabama. Again taking time off, he returned to the University
of Minnesota where he completed work for his Doctor of Philosophy degree. In late 1940 he returned to Wisconsin where he joined the staff of the Department of Plant Pathology where he now holds the position of Professor.

Dr. Darling started work on potato diseases in 1931 while studying for his Master’s degree. In Alabama he continued his research on diseases, particularly those related to the productivity and quality of seed stocks. His interest in this phase of potato culture led to extensive cooperative tests of seed stocks from all parts of the country. In 1940 when he came to Wisconsin he was placed in charge of potato certification. He was also responsible for developing a second proiect on the production of foundation seed.

His interest in disease problems led to his discovery of a damaging nematode pest in 1954. His research program on its control resulted in a soil fumigation treatment that has presently eradicated the pest from several hundred acres of infested land. His continued interest in nematodes led to the establishment of an expanded program of research and teaching in the Department of Plant Pathology.

Although Dr. Darling has spent much time with students, he has found time to publish several technical papers and popular articles. He has also been active for many years in the Potato Association of America, serving on many committees and has just been elected Vice President. In 1960 he was awarded a Senior Fellowship by the National Science Foundation for a 3-month study period in Europe on hematological problems.

He is affiliated with numerous societies including The Potato Association of America, Society of Nematologists and the American Phytopathological Society. As if he hasn’t done enough with potatoes and nematodes, he has also been working on the disease problems of mint, particularly Verticillium wilt. With characteristic thoroughness, he has already made real progress with the problems of this crop.

I am grateful for the privilege to present our Dr. Henry Darling for Honorary Life Membership in The Potato Association of America. I am privileged to make this presentation of Dr. Darling in the absence of his colleague Dr. Bob Hougas, Assistant Director of the Wisconsin Experiment Station, who was unable to leave Madison at this time.

Mr. Westfall came from Missouri to idaho in 1913. He worked on farms and rented land until he purchased “the home place” in 1919. At that time a large portion of the home place was still in sagebrush, but he cleared the ground, built irrigation ditches and really pioneered the farm from the desert.

Even though he is now semi-retired, together with his son, he still grows some 120 acres of Russet Burbank potatoes each year. He has been very active in the improvement of the potato industry in Idaho. He was a member of the Idaho Potato and Onion Commission for 22 years and was vice-chairman of this body for 14-16 years (the commissioner of agriculture is automatically the chairman of this commission). For many years he was a member of the Nematode Control Committee and a member of the Western States Plant Quarantine Board. He has been a member of the University of Idaho Potato Seedling Selection Committee since its inception some 12 years ago. He served for a number of years on file Governor’s Potato Coordinating Commission. He was also the chairman of the Research and Education Advisory Committee which advises the Potato and Onion Commission on research projects sponsored and financed by the tax funds from the Potato and Onion Commission. He has been a very staunch supporter of the research which would aid the potato industry of Idaho and had a very direct and active part in formulating policies in the many years he served on the State Legislature as representative from Bingham County. He has been outstanding in his dedication to the improvement of the potato industry in Idaho and has been an inspiration to many younger farmers and is one of the first to adopt recommended practices to improve the quality of the crop.

It gives me great pleasure to present Mr. Frank L. Westfall for Honorary Life Membership in the Potato Association of America. 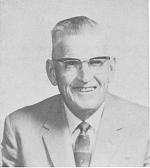 Dr. Cecil W. Frutchey was born and raised in western Oregon and operated a 900 acre potato-dairy ranch prior to attending Oregon State University from which he received his B.S. degree in 1930. He did graduate work in Plant Pathology at Michigan State University from 1930-1935 and won his M.S. and Ph.D. degrees.

He was a USDA Agronomist at Colorado Springs 1935-37 and Presque Isle, Maine 1937-42, and operated a potato farm in Maine from 1942 to 1946. From 1946 to 1960 Dr. Frutchey was manager Potato Seed Certification — Extension Potato Specialist, at Colorado State University. While Extension Potato Specialist, he developed extensive variety trials, seed certification foundation programs and cooperated with research men in the conduct of extensive fertilizer trials with potatoes. He is the author of many publications on potatoes and his last one was a widely accepted bulletin on the production of potatoes for potato chipping.

Dr. Frutchey also supervised the operation of the San Luis Valley Station of the University while it was under the jurisdiction of the Extension Service. He contributed to the use of better seed and varieties, improved cultural practices and better storage of potatoes in Colorado, which resulted in the development of a progressive method of potato production. For the years 1960-1962, he was on the University of Wyoming AID Team at Kabal, Afghanistan, and in the second year was director of horticultural research on this team. Upon returning here he was assigned to a University of Nebraska cooperative unit in Turkey in 1963. Both of these educational and research efforts on potato improvement were in cooperation with A.I.D.

Dr. Frutehey actively served the Potato Association of America on many committees and as Vice President and President. In the year of his Presidency 1956, he was an instigator of the Potato Association’s Potato Handbook. In addition to urging its production, he worked hard as Associate Editor of the first issue on Seed Certification. The Potato Handbooks have been a success and as a result have been published annually.

It is with pleasure that I present Dr. Cecil W. Frutchey for Honorary Life Membership in the Potato Association of America.

Dr. Cecil William Frutchey, 67, died Aug. 23 at about 6:30 p.m., northwest of Monte Vista. He had gone to the field after 5 p.m. to turn on a pump to water the house lawn and was shoveling in a check ditch when he collapsed and died instantly. He was found about 7:30 p.m. after Bob and Jim Wright went to look for him. At the time of his death he was residing on the Lylnan Wright ranch.

Dr. Frutchey was born Jan. 2, 1904, in Glencoe, Ore., the son of Carrie and Burr Frutchey. Cecil was raised on a homestead in Winlock, Ore. He married Joyce Brown in 1933 at Michigan State University. After leaving college he worked for the Soil Conservation Service in Colorado Springs, Colo., and then as Soil Conservation Service Project Manager in Presque Isle, Maine. During the war years he grew potatoes in Dover-Foxcroft, Maine. After the war he took the position of Potato Seed Certification Manager for the Extension Service of Colorado at Colorado State University at Fort Collins. In 1960 the University of Wyoming sent him to Afghanistan to help develop a department of agriculture for the University of Kabul. Two years later he went to Attaturk University in Erzerum, Turkey, for the University of Nebraska as Chief of Party. When he returned to the United States, he went with Lyman Wright and Sons as their special Consultant for Certified Seed Potatoes. He was president of the Potato Association of America from Sept. 1955 to Dec. 1956, director for 10 years and elected honorary life member in 1964. For the last three years he has been partially retired.

He is survived by his widow, Joyce Brown Frutchey, and a son, Burr Frutchey of Spokane, Ore.. and a daughter, Mrs. Jeanine Rye of Houston, Texas; two sisters, Mrs. Bernice Welter of Tillamook, Ore., and Mrs. Roy Shaw of Gilmer, Texas.

We were shocked and saddened by his sudden passing. Cecil will be missed by a host of his friends and associates. We all extend our sympathy to his family.