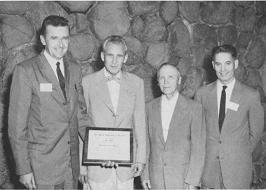 It gives me a great deal of satisfaction to present the name of Dr. Ora Smith to the Potato Association of America for Honorary Life Membership. In Presenting his name I would like to give a brief resume of his background. In the time allotted only a portion of Dr. Smith’s background and career highlights can be covered.

Dr. Smith was born in southern Illinois. When not in school his time was spent on a vegetable farm. He specialized in vegetable production at the University of Illinois and received a Bachelor of Science degree in 1923. In 1924 he received a Master of Science degree at Iowa State College, and remained on the staff there. He went to California as a research assistant in 1927 and received his PhD in 1929, doing research with potatoes. In 1929-1930 he was on the staff at Oklahoma A. & M. College. In 1930 he went to Cornell as Assistant Professor in Vegetable Crops and became a full Professor in 1938. He is still at Cornell engaged largely in research on production, storage, and processing of potatoes with special attention to potato quality. He also teaches a course on potato production and processing.

Since going to Cornell Dr. Smith has had many other responsibilities. For several months in 1934 he was on leave to the Production Credit Division of the Farm Credit Administration. During a sabbatical year in 1938 he visited 75 colleges and experiment stations in 18 European countries, and studied their research programs. He is probably better known by potato people outside the United States than any other man from this country.

During the war he conducted several research programs on dehydration for the (Quartermaster Corp. for which he was cited. In 1946 and 1947 be was a member of the staff of the Inter-American Institute of Agriculture and Science in Tnrialba, Costa Rica. In 1949 and 1950, on an eight months leave from Cornell, he inaugurated the Research Division of the Potato Chip Institute International and served as its first Director of Research, and still serves in that capacity. At the request of the Ministry of Agriculture of the Netherlands, he was sent to that country to study and help their potato industry in 1952.

Dr. Smith is affiliated with many honorary and scientific societies. He was president of the Potato Association of America in 1938-39 and secretary for four years. He has written over 250 scientific and popular articles. He recently co-authored a book on potato processing which will definitely be on the shelf of anyone interested in the potato. He was recently awarded a plaque and cited for his outstanding service to the potato industry by the National Potato Council.

To back-track a minute, in 1927 Dr. Smith married Laura Lee, while at Iowa State. They have two children, James, a graduate student in chemistry at Iowa State University and Sarah Jane, a senior at Ithaca High School. Mrs. Smith received her PhD at the University of California in 1930 and is presently on the staff of the Cornell School of Hotel Administration.

Dr. Smith’s influence on potato research has been far more reaching than the highlights just mentioned indicate. To bear this out, at a recent Potato Utilization Conference fore invitational speakers, during one half day session were former graduate students of his.

As one of his former graduate students and a fellow staff member, it is a very satisfying experience for me to present Dr. Smith’s name to the Potato Association of America for Honorary Life Membership.

It is a very great privelege today for me to present my very good friend, Mr. Ben Picha, as a candidate for Honorary Life Membership in The Potato Association of America.

Mr. Picha was born on a farm near New Prague, Minnesota in 1893. After graduation from high school, he attended the University of Minnesota. In 1916 he received his Bachelor of Science degree in Agriculture from that institution and he immediately enrolled in the graduate school. Before completing his Master’s degree, he accepted a position to teach General Science at the Barton Academy in Mobile, Alabama. Probably his first experience with potatoes came when he operated the Red River Seed Company at M0orhead, Minnesota, an organization dealing primarily with certified seed potatoes.

After seven years in the Red River Valley, he moved to southern Minnesota where he managed the Hollandale Marketing Association located on a newly developed area of peat land. It was here that Mr. Picha became intensely interested in the need for scab resistant varieties. While at Hollandale he made several hundred crosses in the search for better varieties of potatoes, lie exchanged materials with Dr. Krantz of Minnesota, Drs. Schall and Irwin of Iowa, Professor Edmonson of Greely, Colorado and Dr. Stevenson of the United States Department of Agriculture.

He also conducted extensive variety trials and cooperated with the National Potato Breeding Program. In 1945 he moved to Grand Forks, North Dakota where he engaged in the business of growing and shipping certified seed potatoes. In order to expand his program of potato improvement he moved this work to an isolated area at Oklee, Minnesota. This provided him with a place to increase varieties and new selections and maintain them free of virus diseases. Today Mr. Picha has about six acres of first generation seedlings, promising selections, and new varieties. Many of these are still free of virus X.

He has cooperated freely with potato workers throughout the United States and Canada. True seed of many of his crosses have been grown by breeders in various Experiment Stations. As a result of his program in 1952 he introduced one of the first red varieties showing tolerance to common scab. This he called Redkote for its intense red color and smooth shallow-eyed tubers. At these meetings he will report on the introduction of his second variety–Erlired which shows extreme earliness, high red color and uniform tuber size and shape. From tests conducted in many states this variety appears to have a definite place in the early red potato producing areas. He also has several other promising selections which he intends to name and introduce in the near future.

During the past 15 years, Mr. Picha has been a member of the Minnesota Certified Seed Potato Commission and since 1955 he has been a member of the Potato Advisory Committee on research and marketing for the United States Department of Agriculture. He is a long time member of the Potato Association of America. He has travelled widely and is well informed on potato production and marketing problems. Mr. Picha could also be classed as a taxonomist, bacteriologist, meteriologist and chemist as many of his friends will agree.

It is a privilege and an honor to r)resent Dr. Russell Harold Larson for honorary life membershi!) in the Potato Association of America. He has served the entire potato industry through his research on potato diseases since 1935. Since making his first contribution to potato pathology on the common scab disease, Dr. Larson’s work has delt with Verticillium wilt, internal heat necrosis, and a large nmnber of virus diseases which include virus X, virus Y, virus M, virus S, virus F, virus A, leaf roll, potato yellow dwarf, and the soil borne corky ringspot virus. Resistance to viruses Y, S, and F have been reported from his laboratory. He has served the Potato Association of America meritoriously by his activities at the meetings in presenting research contributions and by his outstanding work as chairman of International Relations Committee.

Dr. Larson studied plant virus research in England, Ireland and Scotland for three months in 1946, and in 1954 he accepted a Fulbright Fellowship for six months of study in Holland on plant virus research. Societies to which Dr. Larson belongs are: Phi Sigma, Gamma Alpha, Sigma Xi, The American Phytopathological Society, and the Potato Association of America.

During Dr. Larson’s productive professional career, he has published over 80 papers on diseases of potato, onion, and cabbage, 56 of these papers being concerned primarily with potato diseases. Thirteen students have beeen privileged to study for their Doctor of Philosophy degree in Dr. Larson’s laboratories.

Mr. Chairman, it is a real privilege and a pleasure to introduce our friend and respected associate Dr. R. H. Larson at the 1960 annual recognition dinner for Honorary Life Membership in the Potato Association of America.