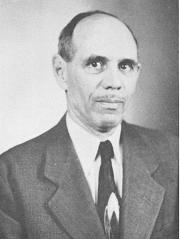 When our president, Mr. N. M. Parks, asked me to prepare a biographical sketch on Dr. John Bushnell, I was pleased. Many of the members of this association have known him far longer than I. He has been very kind to me on many occasions. Now I hope I can repay him in this small way for his many kindnesses.

Our member to be honored was born near Minneapolis on March 12, 1893. He received his bachelor of science degree from the University of Missouri. In 1918 he received the master of science degree from the University of Minnesota, while on the staff of the Minnesota Agricultural Experiment Station. Some of his early work pertained to plant breeding. However, his interest in plant physiology increased, and he started working on temperature relationships in potato production. This was
continued at the University of Chicago where he earned his doctor of philosophy degree.

Dr. Bushnell moved to Ohio in 1923 after joining the staff at the Ohio Agricultural Experiment Station, where he conducted research work on potatoes and other vegetables until his retirement on January 1, 1958. He is now serving as a consultant to the Growers Chemical Corporation, Milan, Ohio.

Like many other leaders of the potato industry, he has devoted most of his life to potatoes. He was president of the Potato Association of America in 1930 and is a life member of the Ohio Vegetable and Potato Growers Association.

Some of this early research relative to effecs of temperature on growth of the potato plant has been of interest to potato men in many countries. In Ohio his research on the oxygen requirement of potato roots has led to other work on moisture relationships, rotations, irrigation and selection of soils for potatoes. This basic research indicated potato roots needed much larger quantities of oxygen than many other crops.

For many years potato yields in various parts of Ohio were declining. This was especially true on the experimental farm at Wooster. Obviously this caused much concern. Some experts attributed this decline to diseases in the soil, deterioration of varieties and other causes. But it remained for Dr. Bushnell to prove that the decline was due to reduction in soil aeration or lack of sufficient pore space.

Dr. Bushnell is a tireless worker, spending many hours in laboratory and field. He has cooperated with extension workers in Ohio by sharing data with them, helping with preparation of bulletins, visual aids, etc. He has worked with other crops, but I am confident his first desire is to conduct research on potatoes. Nearly 50 articles on potatoes have been prepared by him for professional publications like the American Potato Journal, Soil Science, and others, hi addition to these reports on potato research he has also prepared many other publications on other crops.
He has been characterized as an independent thinker, being willing to venture into new fields and has frequently developed new approaches.

These characteristics are those of a true scientist. Many times he has expressed his views on subjects, knowing that perhaps other points may be more popular, but his strong convictions indicated that a certain point should be made. Many examples could be cited to illustrate the point. In 1922 Dr. Bushnell married one of his college class mates–Dyllone Hempstead. She graduated from the University of Minnesota with a bachelor of science degree in agriculture. They have four sons. John, Jr. has a doctor’s degree in anthropology from California and is with the Mellon Institute; Robert is a statistician in the field of guided missiles and is presently working toward a doctor’s degree at Wisconsin; Clifford has graduated from Wooster College, and William is a research fellow in Botany at Wisconsin.

Those of us in Ohio who are associated with the potato industry appreciate the work that has been done by Dr Bushnell and are happy to have him receive this national honor from the Potato Association of America. I congratulate you, Dr. Bushnell, upon your election to this exclusive group in our association 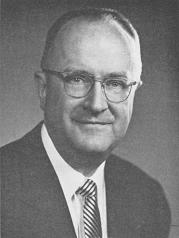 Being, relatively speaking, a youngster in potato work in Maine, I feel a bit inadequate to do the job of introducing our honored guest, Mr. Frank Hussey who has been honored by this Association by being selected as an Honorary life Member. All over the country, his name has been synonymous with the Maine Potato Industry for many years. I am sure he knows more people in the potato world than any other individual in the room. He has been connected with all phases of the industry over the years and to list all of his various affiliations would be a speech in itself. Some highlights of his career with potatoes are as follows: He was born on a farm in Maysville, Maine in 1902, and graduated from the University of Maine in 1925. He operated farms producing 500 acres of seed potatoes for many
years.

Frank helped to organize, and was associated with, Maine Potato Growers, Inc. of Presque Isle (a cooperative sales organization) for 23 years serving as treasurer for 3 years and 20 years as its president. He served on the USDA Potato Research and Marketing Advisory Committee for 8 years, and was its Chairman for 2 years. He was Chairman of the Task Group for White Potato Products to the President’s Appointed Bipartisan Commission on Increased Industrial Use of Agricultural Products.

He presently serves as executive vice-president of the Maine Potato Council and Director of the National Potato Council, the Presque Isle Starch Company and the Aroostook Valley Railroad. Activities worthy of note not directly connected with the potato industry include the following:
1. Trustee of University of Maine since 1941.
2. First President of Maine Farm Bureau.
3. Served as President of Maine Extension Service .
4. Served as President of National Council of Farmer Cooperatives.
5. Served as Chairman of the State Committee on the White House
Conference on Education, and was a delegate to the White House Conference in Washington.
6. Presented with the Service To Youth Award by the Y.M.C.A. for 25 years of service.
7. Appointed Chairman of the Maine Citizens Committee to study structure of the State Government.
8. Member of Board of Governors of Agricultural Hall of Fame.

Frank has 3 sons and one daughter. One son is now attending Purdue University, one is a lawyer and one serves in the Armed Services. His daughter is a secretary in the Dean’s office at Boston University. Significantly, none of them are in the potato business.

To inject a bit of humor, I would like to mention Frank’s political activities but since this is Maine’s political season, I will refrain from mentioning his party affiliation and only say that he has latent political ability.

The one thing that is closer to Frank than potatoes is the telephone. You can hardly get him to go fishing if it takes him out of reach of a phone. It has jokingly been said that when Frank reaches his final resting place, he won’t lie still unless a phone is installed.

In all seriousness, I know of no person in Maine more worthy of this honor and it is with a great deal of pride that I present it to you Mr. Frank W. Hussey

Ernest Joseph Wheeler was born on a fruit farm in the Finger Lakes section of New York state at the turn of the century and attended high school at Hammondsport, New York. After graduation from high school he worked approximately four years in Detroit in factories and in carpentry work. He attended Michigan Agricultural College (now Michigan State University) graduating from the four-year course with a Bachelor of Science degree in 1926 and a Master of Science degree in 1928. in 1929, E. J. Wheeler began his many years of service to Michigan State University and was placed in charge of the potato research work at the Lake City Experiment Station. At this time he entered the cooperative potato breeding work of the United States Department of Agriculture and has been active ever since in this cooperative effort.

E. J. Wheeler was assigned by the United States Army to serve as Horticultural Consultant to the Japanese government in 1948-1949. During this time he was on leave of absence from Michigan State University. While in Japan he studied means of increasing food production by improving the Japanese potato crop. He concentrated his efforts on developing high quality seed and in variety improvement. In 1953 he was selected to go to Okinawa for two years as Chief of the Michigan State University nfission to the University of the Ryukyus. He returned to Michigan State in 1955.

At the time of this writing Professor Wheeler is preparing to leave for Simla, India, to serve as Potato Cultural Consultant for the International Cooperation Adnfinistration. He is now serving his second term as director of the Potato Association of America.

His early research on hollow heart of potatoes demonstrated that closer spacing would reduce the incidence of this disorder. In 1928, he worked on potato spraying and prepared a bulletin on the subject for potato growers of Michigan. He helped to promote the Katahdin potato in Michigan by publishing results of his trials. This variety is still widely used in the state. His research with rye as a winter cover crop in potato culture for erosion control and for scab control has become a common practice in the potato growing areas of Michigan.

The Pontiac potato, released in 1936, is an important red variety still widely grown in sections of the United States. This seedling was selected by Professor Wheeler from a packet of true seed supplied by the potato breeding program of the United States Department of Agriculture. In 1944, E. J. Wheeler had a part in the release of the Menominee potato which was one of the first scab resistant varieties released in this country. While on assignment to Japan, one of the potato seedlings which he took with him became very popular. This potato which is grown in a region of the islands where 2 potato crops are produced annually has been named the Wheeler potato. In recent years another potato variety, Onaway, has been released for the early potato producing area near Bay City, Michigan. Because of Professor Wheeler’s many years of outstanding service to the potato industry and because of his contributions enumerated above, it is most appropriate that he should receive Honorary Life Membership in the Potato Association of America.