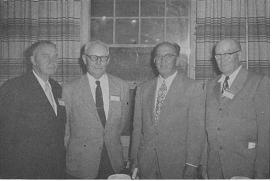 The Potato Association of America honored four scientists for outstanding contributions to the potato industry, at its Annual Meeting held August 27, 28, 29 at Estes Park,Colorado. Three of the four given Honorary Life Memberships in the Association are shown above with retiring president J. W. Scannell, at the left. Others, in order, are A. J. Tolaas, H. O. Werner and Donald Folsom. Henry Moore was not able to be present.

It is with a great deal of pleasure and pride that I present to you Dr. Donald Folsom, a true potato scientist. Dr. Folsom was born in Iowa in 1891 and later moved to Nebraska. His undergraduate work was done at the University of Nebraska where he majored in Botany. For his M.A. and Ph.D. he studied at the University of Minnesota. After receiving his Doctorate degree he taught Botany and Plant Physiology at North Carolina State College. In 1918, Dr. Folsom came to the Maine Agricultural Experiment Station where he was destined to find a home and spend a lifetime of productive work with potatoes.

Under the helpful guidance of Dr. W. J. Morse, Dr. H. A. Edson, and Dr. E. S. Schultz, he conducted or partook in research on a long list of potato problems. Some of these problems were: differentiation of kinds of mosaics, transmission and spread of mosaic, leafroll, and spindle tuber; effect of leafroll on net necrosis; methods of control of virus diseases; differentiation of stem-end browning from net necrosis; causes of early blight rot, botrytis rot, and mahogany browning, and many others. A bibliography of his work contains approximately 114 items. For many years he has been Head of the Department of Plant Pathology at the University of Maine in addition to being a member of the staff of the Maine Agricultural Experiment Station. Dr. Folsom has always been a man to whom we, in Certified Seed work, looked for advice, help and counsel. Many of the pressing problems which have confronted us in this work have been solved by his careful research work. In the records of seed improvement work in Maine, Dr. Folsom’s name appears many times as one who has given advice, conducted research work, and in general, given a helping hand.

Outstanding in his list of accomplishments is his work on virus leaf roll and net necrosis of potatoes. His early work on leaf roll resulted in the development of control practices which are common knowIedge to nearly all seed growers and many table stock growers today. Such practices as, early harvesting of seed plots, tuber unit planting, and winter testing in southern areas, have been among the practices advocated by Dr. Folsom. They are as basically sound and effective today as they were years ago. For the past several years Dr. Folsom, among other things, has been working on the wilt disease, Verticillium atbo-atrum. Results of this work already indicate that under Maine conditions, crop rotation is an important step in the control of this disease.

We, in Maine who are connected with the potato industry know the value of Dr. Folsom’s many contributions to the science of potato production and are very happy to have Doctor Folsom receive his national honor from the Potato Association of America.

Henry Carlton Moore entered Cornell University in 1909 after attending Western Maryland College but left for a few years to do outside work. He reentered Cornell in 1912 and received his degree from there in 1915. After spending two years in landscape work in Illinois and Minnesota he came to Michigan in 1917 but soon entered the military service. He was an officer in the Field Artillery until the end of World War I after which he joined the staff of the Horticultural Department of Michigan State College.

It was under his direction that the first certified seed potato program was started in Michigan and this has since been his favorite project. He assisted Dr. William Stuart with the earliest work on certification and standardization of varieties.

While serving as secretary-treasurer of the Potato Association of America for 8 years he also edited the American Potato Journal and the Proceedings of the Association.

One of his highest honors was his election to the presidency of the Potato Association of America in 1927. Aside from his contribution to the technical and educational aspects of potato culture, he has found time to maintain personal contacts with growers and distributors throughout the entire United States and Canada.

A. G. Tolaas was born in St. Paul, Minnesota, February 22, 1888. He graduated from the College of Agriculture of the University of Minnesota in 1911, and was granted the M.Sc. degree in plant pathology in 1912. From 1912 to 1915 he was assistant in plant pathology at Minnesota, was extension plant pathologist with the Minnesota Agricultural Experiment Station from 1915 to 1919, and in 1919 assumed charge of potato certification in Minnesota, a position he has held, with distinction, ever since.

During his early days in plant pathology and later as extension plant pathologist. Mr. Tolaas participated and assumed leadership in experiments to control “running out” in potatoes, a condition now known to be caused, principally, by virus diseases. Although the causes of these diseases were not then known, the fact of seed transmission was recognized. To test the efficacy of tuber-unit planting as a method of maintaining disease-free stock, Mr Tolaas and others established a series of experimental demonstation plots with farmers. These were phenomenally successful in showing that disease-free seed produced higher yields than field-run seed. Experiments were also conducted during this period on sprays, seed treatment, and other methods of controlling potato diseases, and Mr. Tolaas was co-author of several station bulletins describing experimental results and making the information available to potato growers. When the Minnesota legislature passed the potato certification law in 1919, Mr. Tolaas helped draft it in its original form, and as changing conditions have made changes and revisions necessary, his wisdom and experience have guided the lawmakers. The establishment of potato certification in 1919, with Tolaas in charge made Minnesota the second state to adopt officially this means of disease control, although through the efforts of Mr. Tolaas and others in the Division of Plant Pathology, the methods basic to producing certified seed had been practiced for several years before.

Mr. Tolaas took over the job of certifying potatoes in Minnesota with a background of scientific experience from his work with potato diseases, and of experience in working with farmers from his tenure as one of the first extension specialists in plant pathology in the United States. IIe also gained the confidence of many potato growers in the state by the success of the seed plots and other experiments started several years before.

During the past 35 years this training, experience, and good will have helped him to make the state of Minnesota one of the leading producers of certified potato seed. As new facts were discovered he skillfully applied them to practical situations; as the soundness of his knowledge and judgment became more apparent, the confidence of the potato growers increased and the growers, through his teachings, became one of the best-informed groups of farmers in the state. To them as to his scientific colleagues he stands at the top as an authority on potato disease control, and as a leader in teaching people how to apply science to their own problems.

When our President, Mr. J. W. Scannell, asked me to present my old friend and professor, Dr. H. O. Werner, as a candidate for honorary membership, I was very pleased. This gave me an opportunity to partially repay many of the personal favors which I have obtained from him for a long period of time. I was also glad to act as spokesman for the many Nebraska people with whom he has worked for more than 35 years. I am sure many of them are envious of my position.

His first position after completing under-graduate work, was at North Dakota Agricultural College, Fargo, in 1913. He remained at this post until October, 1918, when he came to the Agricultural College of the University of Nebraska, at Lincoln, where he has remained ever since. At present he is Professor of Horticulture.

Dr. Werner’s activities covered a wide field. Although most geople think of him as a potato specialist only, he has conducted considerable work in the vegetable field, connected with tomato breeding and cultural tests on sweet potatoes. He has also served in extension, teaching, and research in the field of horticulture.

Dr. Werner’s chief line of activity, of course, has been connected with potatoes. Because of the wide extent of his activities, I can only enumerate them without elaborating. These cover many phases of, or relating, to potatoes. He has conducted numerous cultural experiments; in collaboration with Dr. R. W. Goss, a number of disease trials were conducted, one of which resulted in the discovery of tile Spindle Tuber disease; his tuber and plant studies are very extensive: potato storage experiments were conducted in collaboration with A. D. Edgar, of the U.S.D.A. and are still in progress; potato breeding, which has been his chief activity for the past 15 years, is at present among the most extensive at any Experiment Station in the United States.

There are many tangible results of his activities, not only in Nebraska, but in the National potato field as well. My own file is not complete. However, I have a list of more than 100 technical and other bulletins which he has published. These do not include the many papers written for popular release in newspapers and other miscellaneous publications. He still has a prodigious amount of material available, which is unpublished. In my opinion, one of his outstanding fields of activity has been his development and encouragement of students and co-workers. Many individuals who worked with him are now in responsible positions in other institutions and in commercial fields. It is readily apparent why he is known as “The father of the potato industry” in our state.

Even though I have spoken of his activities in his chosen field of work, another field should not be overlooked. This is his personal and family life. He, and his able partner and wife, whom we are also honoring today, had a fine family of two boys and two girls, all of whom are successfully established in fields of their own.

Through the years, a number of honors have come to Dr. Werner, although I am sure they have not been adequate to compensate for his many activities. About ten years ago, at their annual meeting, the officers of the Nebraska Certified Potato Growers Non-Stock Co-Operative honored Dr. Werner for 25 years of service, and presented him with a gold watch. Two years ago the officers of the Potato Certification Association of Nebraska presented Dr. VVerner with an honorary membership in their Association, for more than 30 years of potato improvement work. Other honors have come his way, which I am unable to present at this time.

Again, I am very grateful for the opportunity of presenting my good friend, Dr. H. O. Werner, as a candidate for honorary membership in the Potato Association of America.